Running Injuries: Looking beyond the foot

Running has been a staple of the active health conscious population and is only growing in popularity with greater access to running websites, blogs, and the formation of running groups. Its benefit of improving both physical and psychological outcomes has been consistently proven with only the potential downfall of its high frequency of injury.

Running provides a great example which highlights the integrated nature of our body and the chain reactions which are required for proper movement and control. Running injuries are vast, ranging from the well-known over-use injuries of the lower extremity to the often-overlooked neck and upper back dysfunction. The interconnectedness of the human body can explain why pain may at times be a good distance from the cause of the issue. To further explain this point the ailment of plantar fasciitis will be used as an example.

Plantar fasciitis is an injury that most commonly occurs when the attachment of the fascial tissue of the bottom of the foot gradually pulls away from the heel bone. The symptoms consist of increased pain upon wake, a constant burning sensation, and a reduction in symptoms with rest.

In a majority of plantar fasciitis cases (not all) this increased tension on the fascia is exacerbated by a lack of stability of the sub-talar joint (joint just below the ankle) causing the foot to pronate upon landing. This pronation creates a lack of stability through the mid-foot leading to increased motion further increasing the tensile load on the fascia. Therefore, with sustained running the symptoms will only worsen with time. Additionally, a tight calf muscle on the same leg has also been identified as a precursor to foot pronation and plantar fasciitis symptomatology. Others have also found a link between hip dysfunction and increased pressure on the plantar fascia. Identifying and eliminating dysfunction up the chain can lead to permit resolution of symptoms. 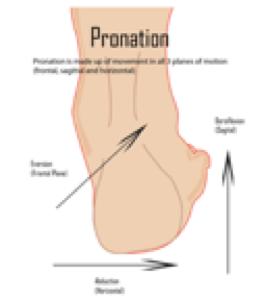 As outlined by Mike Boyle and Gray Cook our body is reliant on the joints above and below to allow proper mobility and stability. Human movement can be explained as a large line of chain reactions with each body part reliant on those connected throughout the body. For example, in order to kick a soccer ball you need the kicking leg to generate speed, the trunk to generate force and the opposite leg to provide stability so you don’t fall forward while the leg swings through. A common issue with plantar fasciitis is tightness of the hip flexors on your opposite leg. This ‘tightness’ will limit joint motion and the effectiveness of the pelvis to rotate during gait. This altered movement pattern will lead to a disruption of normal muscle firing and make it difficult to decelerate the leg leading to a greater degree of pronation on landing. This altered pattern can lead to a host of lower extremity injury depending on the weak link within the chain.